Guest Blogger: Vashti Braha - The Birth of a Yarn

The Birth of a New Yarn
by Vashti Braha

Please welcome today's guest Blogger, my friend Vashti, by following her fantastic blog! Vashti and I met years and years ago at Stitches Midwest Pheasant Run, St. Charles, IL, for those of you who remember back that far! As I recall, Vashti had just joined CGOA and came bouncing up to the CGOA booth that I was running with Nancy Brown, former CGOA President. She later served on the CGOA board as Vice President.

To know Vashti is to love her. Anyone who already follows her blog knows that she has the keen mind of a scientific researcher! It's just that her research delves into crochet and yarn! Vashti also has a giving spirit and is willing to share what she knows with anyone.

I’ve been taking a fresh look at yarn lately: yarn as a modern-day product. This is partly due to getting my own first yarn ready to launch at my site, and partly to my research for a crochet class I taught last month at CGOA’s Chain Link conference in Concord, North Carolina. For the “Beauty of Antique Love Knots” class I focused a magnifying glass on the years 1891  to 1914, the earliest years of Love Knot crochet (Solomon’s Knots, Lover’s Knot) for which I could find English-language materials.

These years which overlap solidly with La Belle Époque in France and the Gilded Age in the US. During this time, several self-publishing crochet designers in the US and England thrilled an avidly crocheting public with a stream of virtuosic pattern booklets.

The Knot Stitch (as the Love Knot was known back then) was often combined with other fancy stitch textures such as Roll Stitches  (a.k.a. Bullions) and Hairpin Lace.

A few decades leading up to this time period provide an interesting backdrop: during the 1840‘s-50‘s, the mercerization of cotton was invented (1844). New Egyptian cotton strains  were being developed and compared during the rest of the 19th century. Crochet was already a popular pastime. The Irish Famine happened during this time, and Queen Victoria promoted a gift of Irish crochet lace on the world stage. Eléanor Riego de la Branchardiere won the Gold Medal at the Great Exhibition for a crocheted child’s dress (1851). The first synthetic dye was produced in 1856. 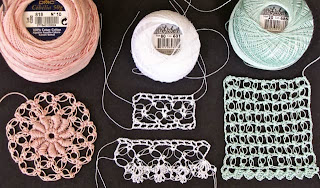 In 1884, DMC hired Thérèse de Dillmont (born 1846). Her Encyclopedia of Needlework  was first published two years later, in 1886. I love this book and refer to it often. Weldon’s Practical Needlework was published from 1886-1893. 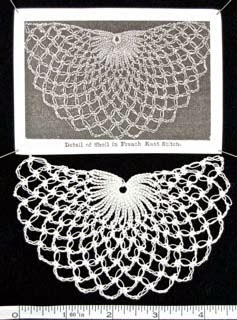 Madame Riego de la Branchardiere died in 1887, and Thérèse de Dillmont in 1890. (I wonder why neither of these influential crochet authors mentioned the Knot Stitch. Perhaps it was unknown to crocheters until 1891.) Meanwhile in America, two women’s suffrage groups, one led by Susan B. Anthony, the other by Lucy Stone, united their efforts (1889).

While crocheters were making fancy new Knot Stitch boudoir caps, towel trims, and tasseled bags, the times were changing rapidly. The first marketable “artificial silk” (rayon) was invented in 1905, and new rayon crochet threads, with patterns using them, became available seemingly overnight. Cotton mills during this time weathered volatile production peaks and rapid expansion, along with grave humanitarian issues. It was in 1912 that the Titanic sank. Queen Victoria (a crocheter) had died in 1901 and the Victorian Age became the Edwardian Age - until the first intimation of World War I in 1914 brought this age to an abrupt end.

I’m working with an American mill to create a yarn that couldn’t have existed before 1905. I’m calling it Lotus. Not only is the cotton blended with rayon, it is perfectly smooth and fairly thin, even though it’s made of twelve plies. There are virtually zero knots in the huge 2-lb. cones. All of this is to say that I can’t imagine hand spinning such a yarn! I see it as squarely a product of the Gilded Age (minus the child labor and cramped conditions).

Everything about producing yarn on a large scale is tricky. Really tricky. I take it for granted because I’ve been crocheting with different yarns and threads for so long that I’m used to how string behaves. When I teach non-crocheters how to handle yarn - winding, packaging, etc. - I have to also sober them up about the nature of string. They tend to underestimate how wily it is, and how close to chaos it can come!

When I behold a ball of yarn, I see the glories of the Industrial Age in it. The preferences of Victorian crocheters and knitters helped to shape the ideal yarn ball. Look at how cute and inviting it is: how its strands are wound so neatly and uniformly, how soft and plump it is, how its colors sing. It promises to be fresh and pristine on the inside and to give a few hours of peaceful enjoyment. I used to take this for granted too, but it’s no accident. I named my new yarn "Lotus" because of the way that I think of how luminous the yarn makes the crochet stitch textures look.

Shortly after receiving my first shipment of yarn from the mill, I woke up from a dream about friendly multicolored little kittens that greeted me at the front door and walked into the house with me.  They tumbled around on things, exploring, then grew drowsy and all fell asleep in a heap on a chair. I marveled at this dreamy dream and then realized it was about yarn!

Vashti Braha said…
I uploaded all fourteen colors to my shop last night! http://www.shop.designingvashti.com/YARNS-New_c39.htm
November 27, 2013 at 9:53 AM

October 30, 2013
Wednesday, October 30, 2013 Karen Ballard and I have a mutual love of free form crochet. We met for the first time in a class taught by Prudence Mapstone of Australia at the Chain Link Crochet Conference 2011. I admire Karen's vast knowledge of needle work history and am grateful for her willingness to share with us as my guest blogger this week. Karen wearing a World War II-era knitting hat with stubby needles on top Karen's Heritage Heart,  with flowers symbolic of her heritage, is currently on tour with Prudence Mapstone's traveling "Hearts & Flowers Exhibition" in Australia and New Zealand   World War 1 Attitudes About Crochet by Karen Ballard In 2008, I coined that term, "Workbasket Campaigns" to describe the organized efforts during World War I (WWI) and World War II (WWII) coordinated through the American Red Cross {ARC} and the Navy League to create needle crafted items.  These items were mostly knitted but also sewn, qu
5 comments
Read more 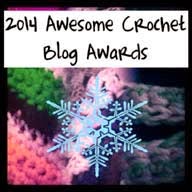